This eggplant dish is sweet, nutty, and delicious.  If you’ve ever tried this Nobu style eggplant, you know how great it is, but you may not have guessed how simple it is to prepare.  Have you been looking for vegan eggplant recipes?  This miso eggplant satisfies that craving. 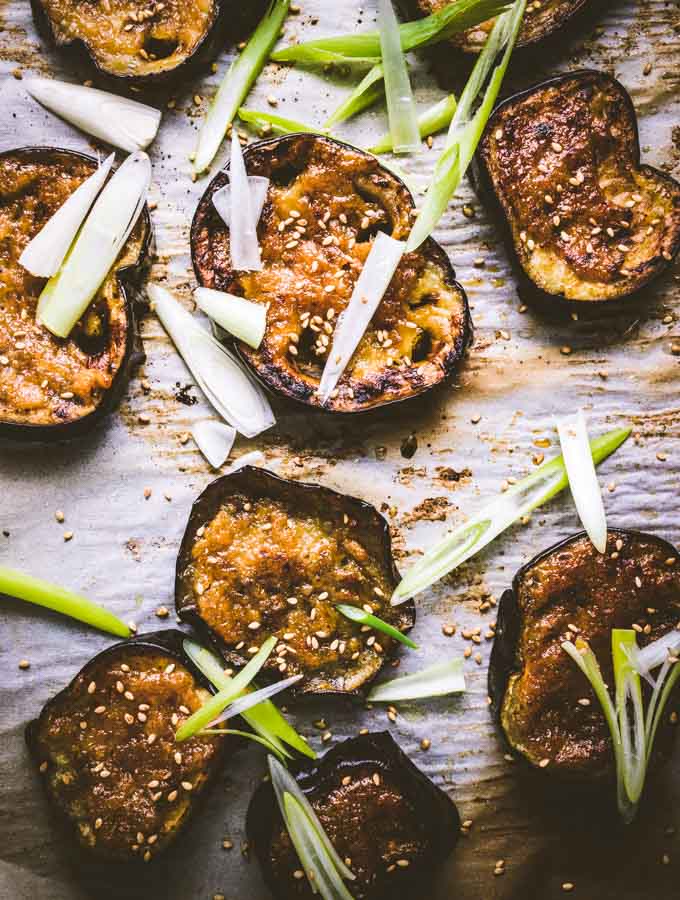 Miso Eggplant Is So Simple!

I just love eggplant.  From the bright, almost indigo hue of the Japanese and Chinese varieties, to the mottled Sicilian, to the deep, almost jet hue of the Italian variety, these gorgeous vegetables are an absolute feast for the eyes.

Not only do they run the visual gamut, they are also extraordinarily versatile, lending themselves to be the stars of many a multi-cultural dish: Chinese stir fry,  Italian eggplant parmigiana, Indian baingan bharta.

Plus, like I said above this is one of those vegan eggplant recipes that are hard to come by.  Most of the time eggplant is a cheese affair, but this one is so satisfying from the miso paste.

You get the idea – eggplant is indeed special.  While eggplant can be a challenge to prepare at times, this particular dish is super easy  – all that is needed, is an oven.

No salting and drying out overnight. No egg and batter and deep frying.  Just slice the eggplant into discs and within 25 minutes, it’s done.  Miso glazed eggplant has become a family favorite. 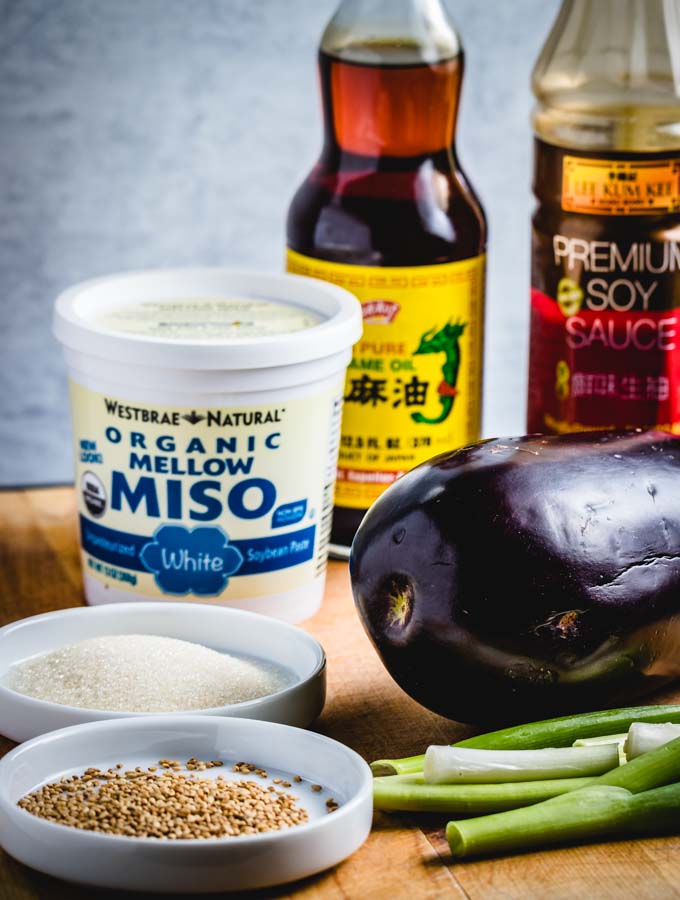 These are the ingredients in this dish plus mirin which is not shown.

My husband and I first fell in love with this dish at our long time favorite Japanese restaurant in Smithtown, NY.  The owner/chef and his namesake restaurant was Kazu.  Unbelievable food that rivaled that of his homeland,  he personally hand picked the freshest fish from the Fulton fish market in New York City and, being an avid fisherman would even pluck his porgies and fluke from the Atlantic himself.  He served his hand rolls immediately, because he understood the importance of pairing of crisp nori and warm rice.  Toro that melted on the tongue, tiny obscure little sweet shrimp, fried whole butter fish, and Usuzukuri (paper thin slices of fluke with dipping sauce) were some of the things we enjoyed most.  Since we were usually the last patrons in Kazu, and accustomed to closing the place, each meal would be capped off with a toast of plum wine between Kazu’s wife, Tatsuku, who we lovingly referred to as Tay, my husband, and I.  “Campai!” was the perfect end to an always impeccable meal.

One dish Kazu would always prepare for us was nasu dengaku: broiled eggplant crackling with this delicious paste.  The glazed eggplant with miso paste was such a great appetizer that I have been making it for years ever since first trying it.  And each time we eat this together, we remember our dear friends Tay and Kazu, and all the wonderful meals they bestowed on us. 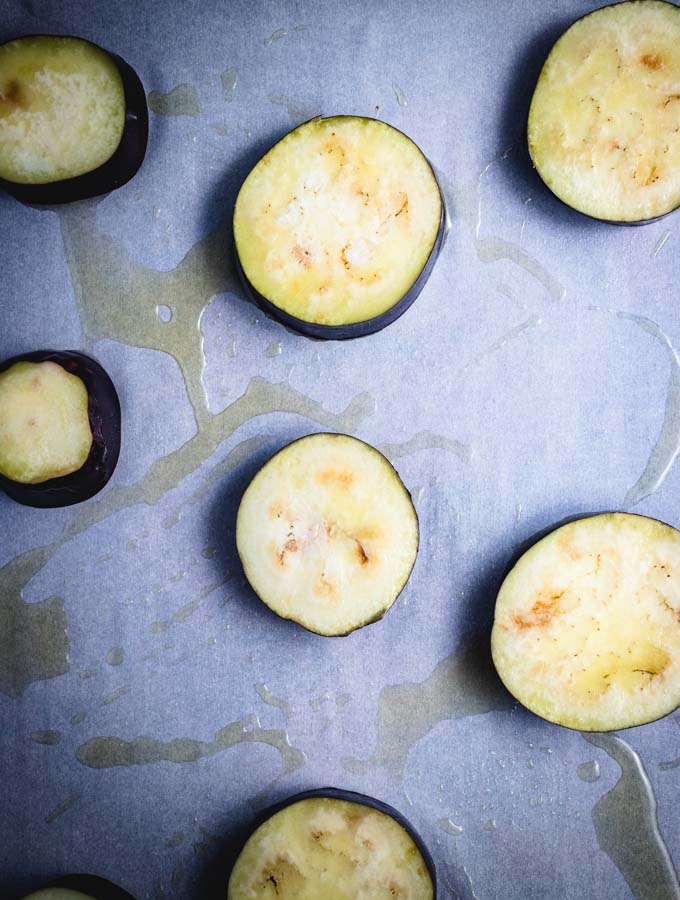 Olive oil is used for the roasting of the eggplant. 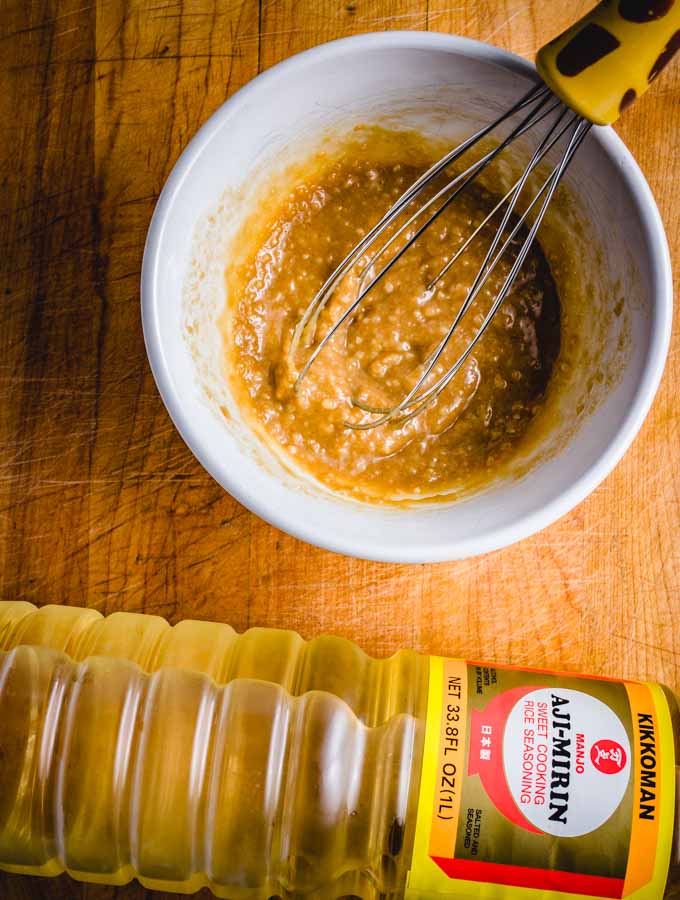 This is what the glaze will look like whisked together. 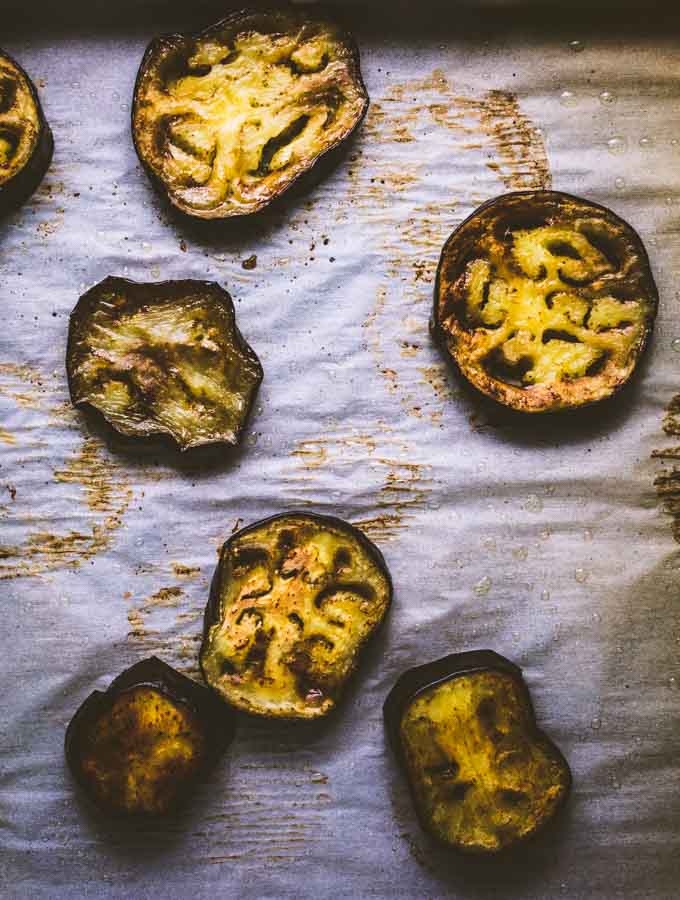 This is how the eggplant will look after roasting in the oven. 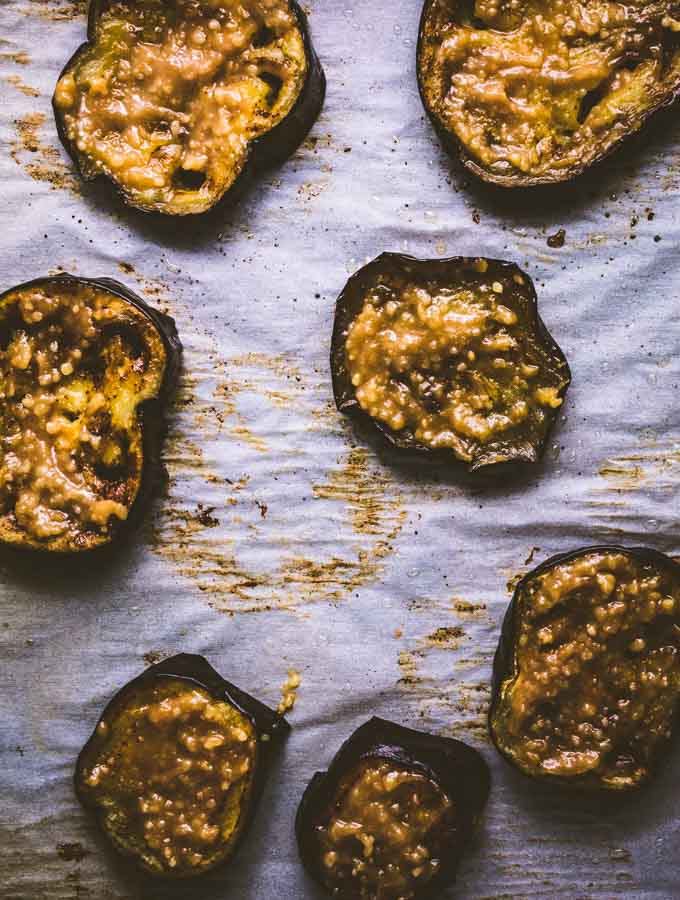 The miso glaze is applied liberally to the eggplant after the roasting process is finished.  Next, the eggplant will be broiled for 3 minutes or so. 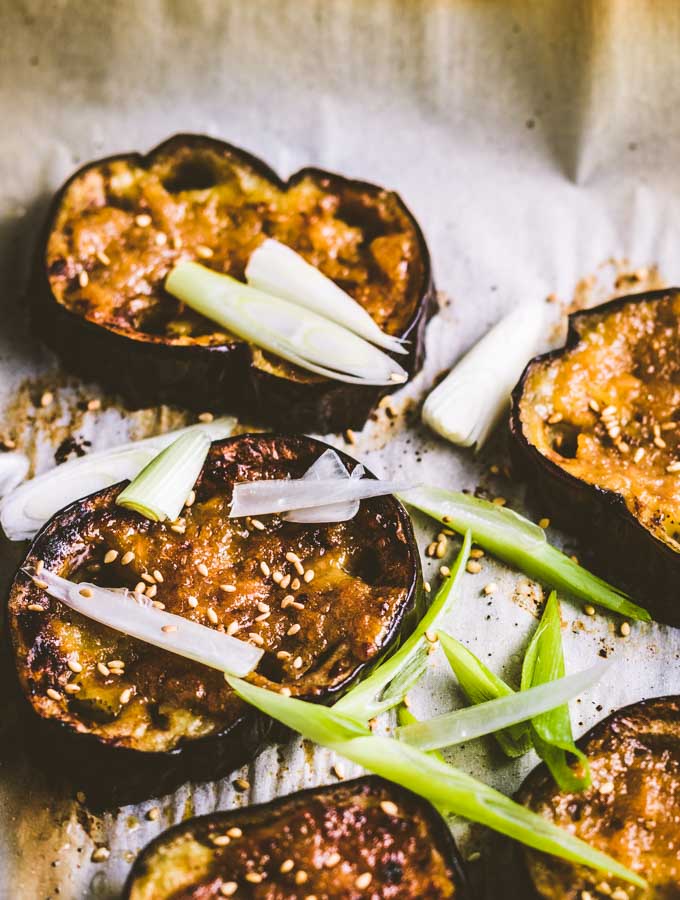 Close up shot of the delicious miso glazed eggplant after the sesame seeds and green onion are added.

The miso paste used in this dish is very versatile it works real well in this miso sweet potato recipe. 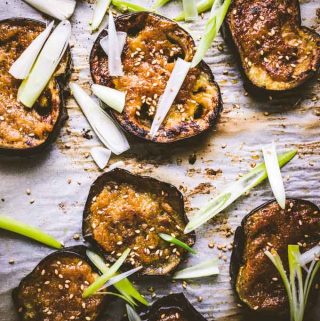 If you enjoyed this vegan miso eggplant recipe share it and leave us a comment.  Use the hashtag #sipandfeast so we can see how you did.

We would love to hear from you.

Hey, thanks for stopping by!

Welcome! I'm Jim and I'm here to help you make awesome Italian food that you would normally enjoy at some of your favorite New York style Italian restaurants. While my recipes are typically Italian, you'll find some other great ones as well. Take a look around, and get cooking! Read More About Me...

Recipe ideas for your inbox 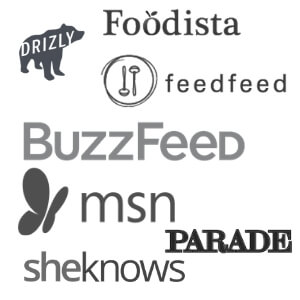 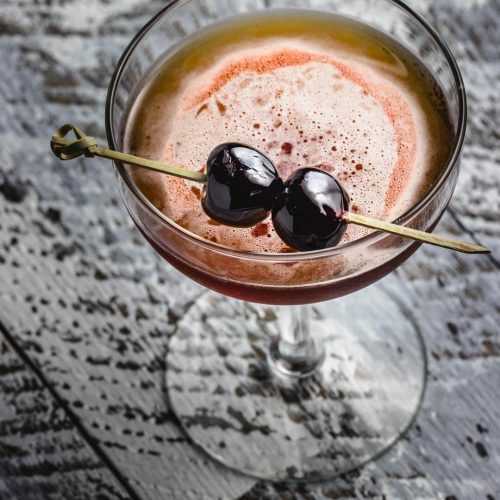 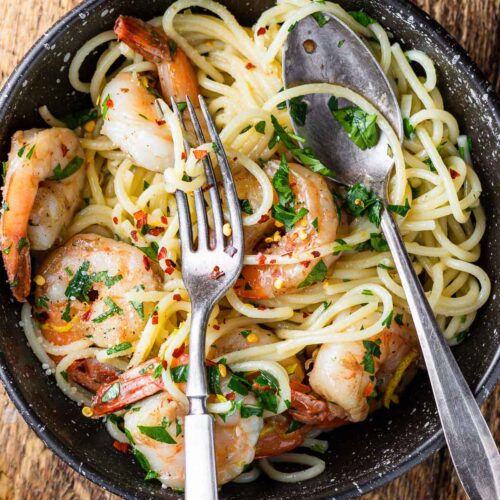 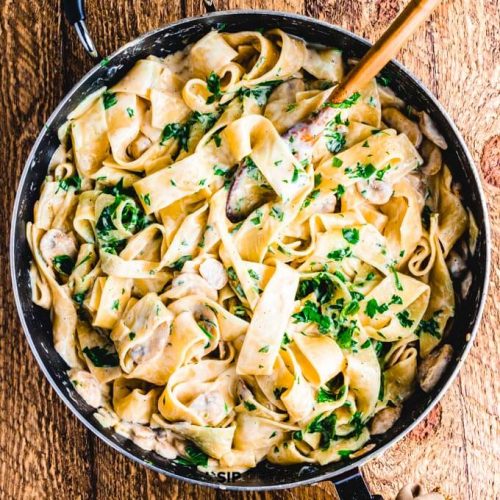 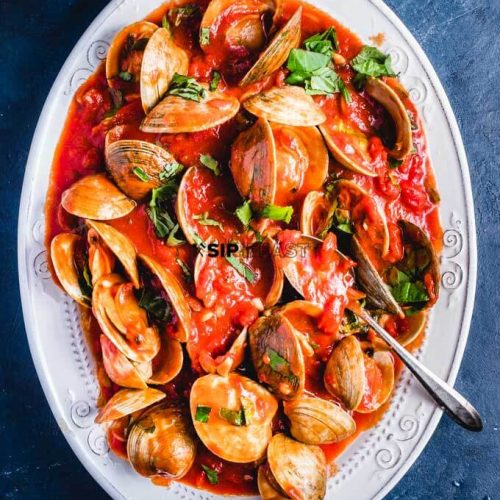 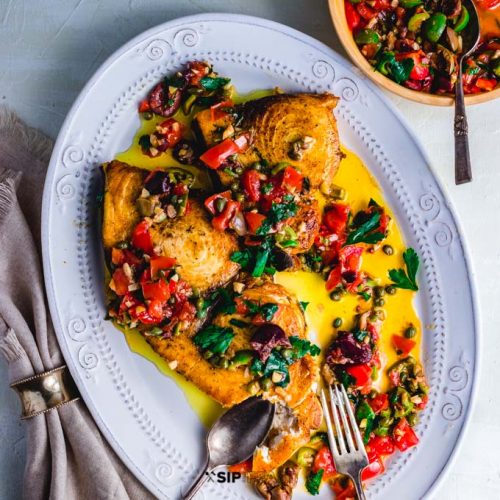 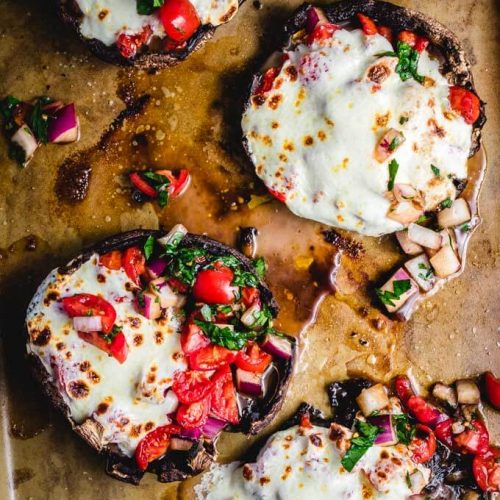 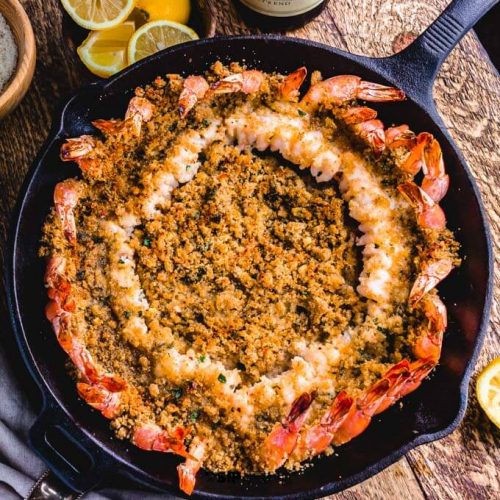 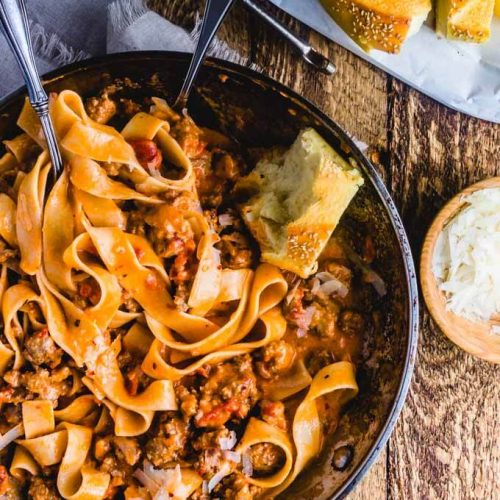