Are you looking for an amazing fish recipe?  If yes, then you need to try our pan-seared swordfish with olives and capers!  The whole dish can be made in under 30 minutes.  That's what's great about making most fish dishes!  This is an adaptation of a Sicilian recipe I've had in many New York Italian restaurants. 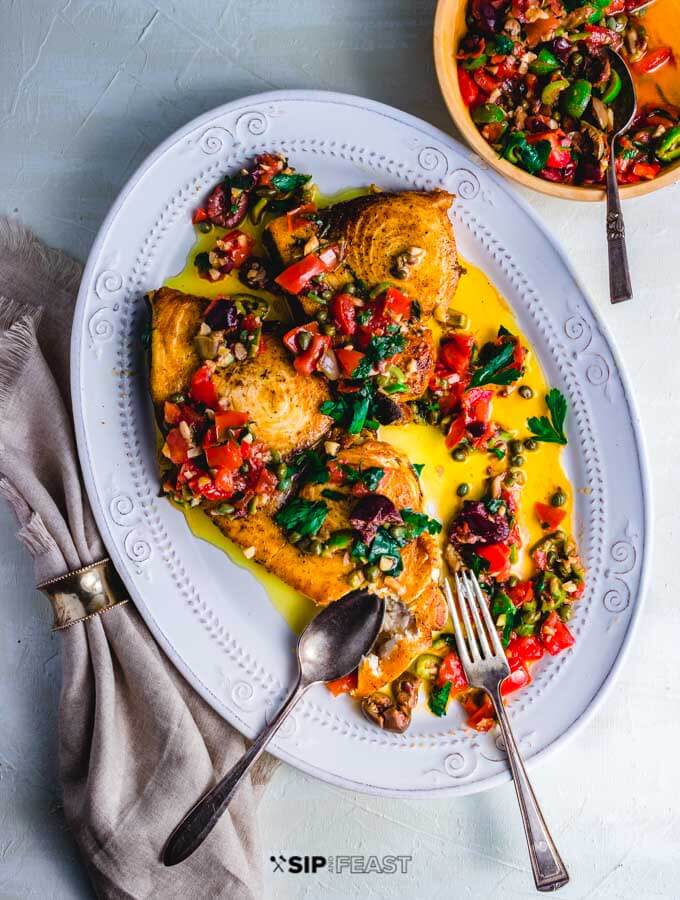 Some variations on the sauce in this recipe include the addition of pine nuts, raisins, and anchovies.

I think the simple fresh flavors, kind of like what we used in our baccala alla napoletana recipe or puttanesca sauce, go really well with the pan-seared swordfish but feel free to add any ingredients you like.

Great quality ingredients are where it all starts for this Sicilian-style swordfish.

Find out what's really fresh from your fishmonger.  Swordfish is obviously the first choice, but this recipe works equally well with Tuna.  It's always nice to have a plan B when going shopping!

How to make pan-seared swordfish with olives and capers 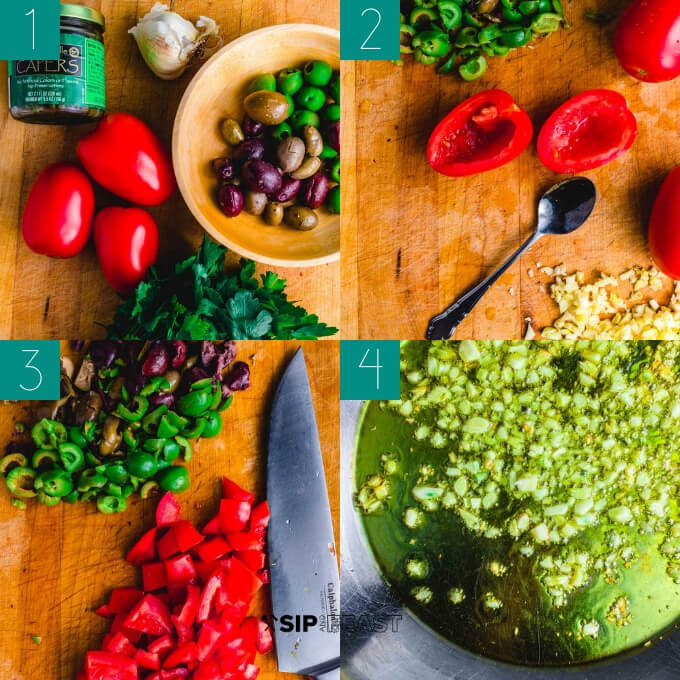 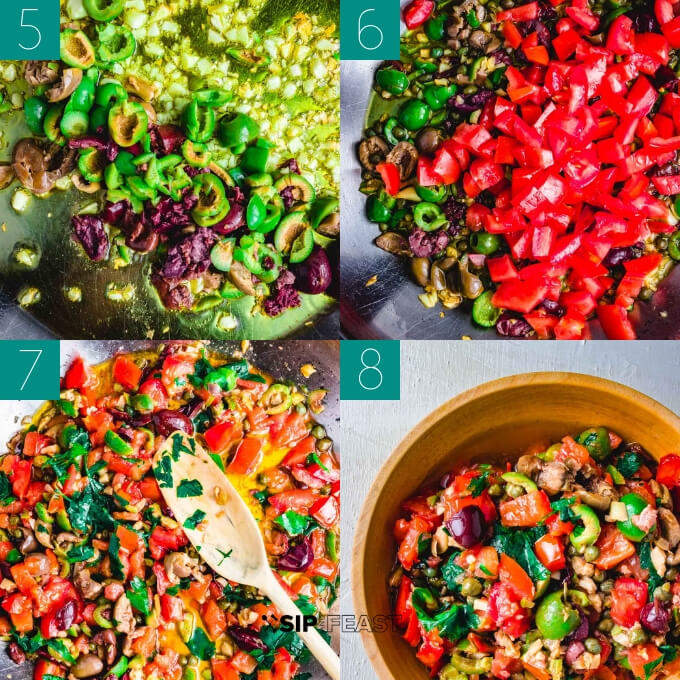 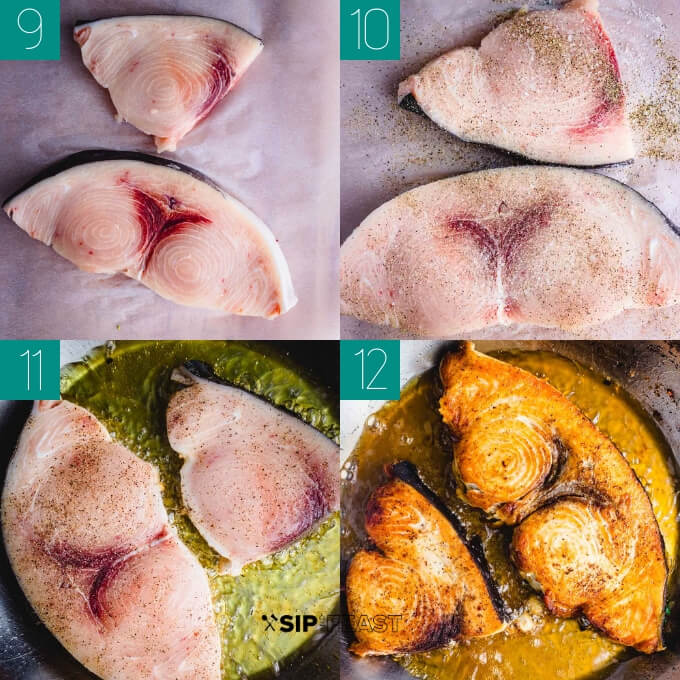 My top swordfish substitutes are tuna, mako shark, and salmon in that order.  Swordfish is a very meaty fish.  It has an almost steak-like quality and is very satisfying.  It works well in many ways that other fish simply cannot.  Kebabs are a prime example of one of those ways.

Mako shark and Tuna have a similar texture to swordfish.

Salmon is not as robust and firm so that would be my last choice of the bunch.

Can swordfish be eaten raw/rare?

While it can be eaten raw or rare, I don't recommend it.  Do you know why?  I rarely see it in Japanese restaurants.  I think that is a major tell.  Read this Quora info on Why is shark or swordfish not used for sushi?

Now I do like to cook the swordfish a tiny bit under-cooked.  Basically medium-well.  If an oily fish like swordfish or tuna is cooked well done it will release more oils and take on a more fishy taste.

The grill is excellent for swordfish steaks or kebabs.

For this particular recipe, everything can be made outside.

Just bring all the chopped ingredients to the grill with a heavy-duty pan and make the sauce in the same manner over medium heat.

When that's finished brush the swordfish steaks with some olive oil, salt, and pepper and grill them over medium heat.  The cooking time should be roughly 6 minutes total for 1" thick steaks.

Another easy swordfish recipe is to simply broil in the oven with oil, salt, and pepper.  I like to put the swordfish steaks in a cast iron pan and broil for 2-3 minutes per side.

When they are finished, a super simple caper, lemon butter sauce can be whipped up in the pan in 1 minute with no heat.

I'm getting hungry thinking of that dish - that will be another recipe I write up on here at some point! 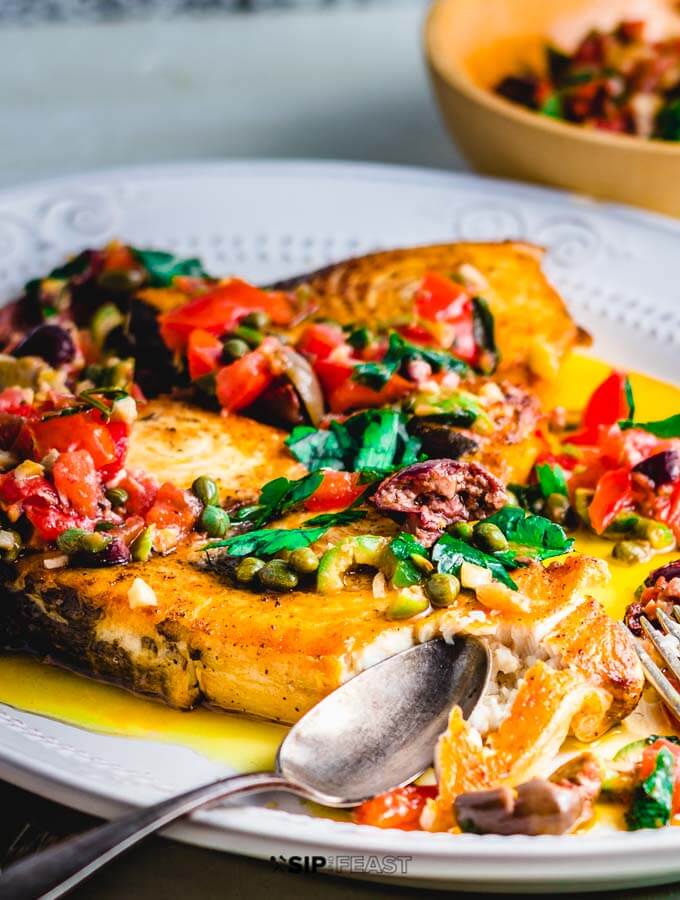 This is an excellent Mediterranean fish recipe that we really hope you enjoy!

If you’ve enjoyed this pan-seared swordfish recipe or any recipe on this site please let us know in the comments.

We would love to hear how you did and it’s nice to show others as well. Thanks! 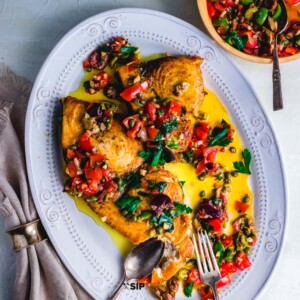 Tuna and Mako Shark are great substitutes for this recipe. The crushed red pepper flakes are totally optional.